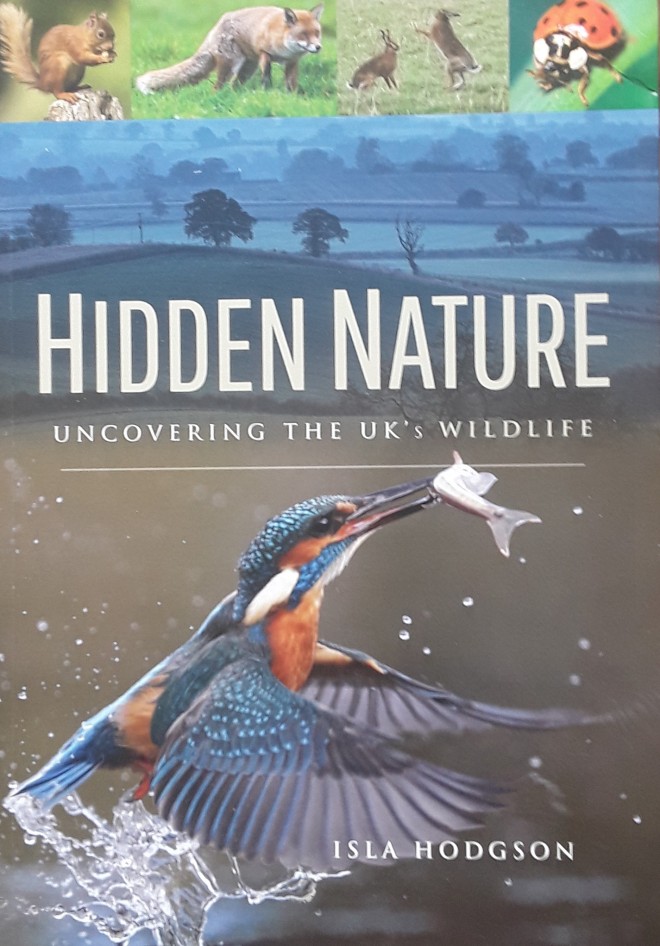 In the Forward to this volume, the author notes that ‘…Wildlife is everywhere in Britain, if you just know where to look’, and that she ‘…Decided to embark on a little mission; to write about our under-appreciated wildlife, in the hope that [she] could enthuse others to get passionate about it too’. The result? A ‘…Guide to re-discovering Britain’s hidden wild life’, written in the hope that ‘It inspires you [the reader] to step outside the door and seek out just what the natural world has to offer’. Admirable sentiments indeed.

The volume is arranged in four sections, preceded by a Foreword in which the author relates the circumstances which led to the book being written and why the format used was chosen and a precis of what is to follow. The main part of the volume comprises four sections (analogous to Chapters, but not notated as such). In the author’s opinion these constitute the main habitat types found in the United Kingdom, and comprise coasts, freshwater, inland areas (forests, grasslands, mountains) and urban spaces respectively. Sub-chapters appear within each larger Chapter. These concern specific geographical areas and the creatures found within them while also recording the author’s personal experiences when observing the creatures under discussion.. As a result, the reader is introduced to a variety of wildlife that includes seals, red deer, various types of birds, foxes and garden insects. As noted, the experiences are all personal, and while certainly introducing the reader to the subject, owe more to the ‘What I did on my holidays’ style of writing  rather than serious scientific study.  That detail notwithstanding, the author has included what she describes as ‘…A wee section that details how you [the reader] might find those species or habitats…the best places across the country to catch a sighting [of the creature being described] [and] where applicable how to encourage these animals to your local patch and …how we can help them’. While admirable in sentiment, these ‘Wee sections’ are arranged in a variety of formats with little consistency being evident. A section titled A Final Word  presents and elaborates-on the author’s view that ‘’…The human race are responsible for the rapid increase in [species] extinction rates’ and provides ideas as to how this may be prevented and reversed. It is followed by the volume’s final section; a three-paragraph section titled Thank you, within which all who contributed to it (creatures included) are acknowledged. The volume contains Colour Photographs, Line Drawings and Half-tone Illustrations by the author. Their existence is not mentioned on the Contents page. .Despite discussing various locations around the British Isles, the volume contains no Maps. No Index is provided.

As already noted, this volume contains neither Maps nor Index, details which could be problematic for those readers living outside the United Kingdom seeking information concerning both the wildlife described and their locations within the British Isles. For this reviewer, a General Ordnance Survey Map showing (at minimum) such locations as the Ythan Estuary and the Isle of Canna would have been helpful. The absence of an Index also creates unnecessary problems for those who may not know where the creature they are seeking may be found within the volume. The title (for example|) Garden Birds (a subsection of Section 4), is meaningless if you don’t know if the bird you are observing fits that category, and where, within the volume, is a ‘Common Pipistrelle’ to be found? Without an Index, one cannot know. Whether or not such an omission is important will depend-upon the individual reader. A separate ‘Identification / Recognition’ section containing a brief description and silhouette of the creatures mentioned within the volume, would also have been helpful.

This is an idiosyncratic volume, written by someone who is clearly passionate about her subject. It is likely to appeal to those interested in ‘Conservation’ as a concept, those seeking advice as to what can be done to assist survival of endangered species, and to readers simply interested in learning more about the creatures which may be lurking in their own immediate area – ‘The ‘critters’ in the back yard’, if you will. Readers seeking beautiful photographs of British wildlife may also find it of interest. 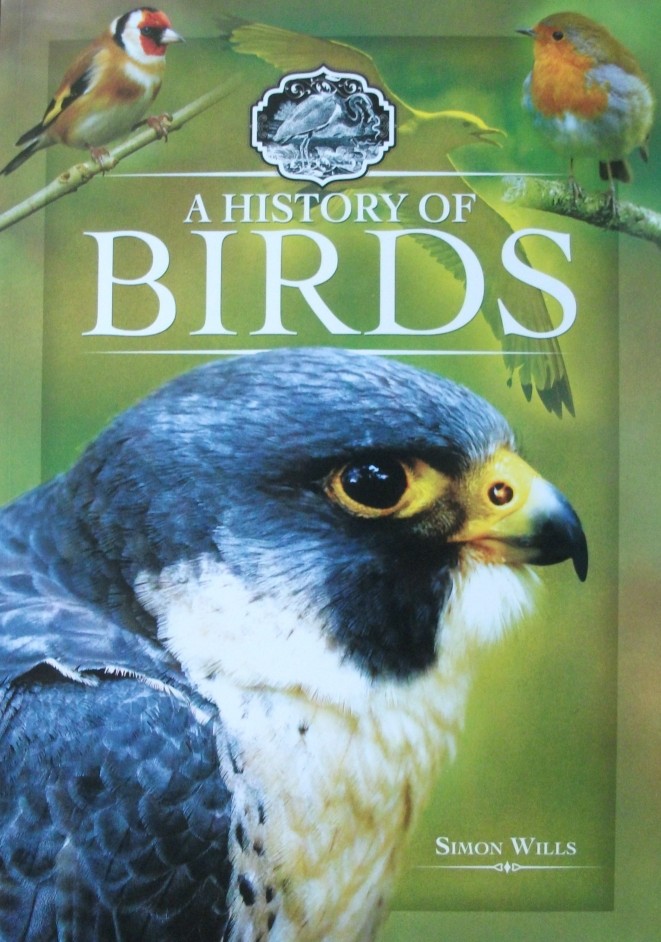 Title:  A History of Birds

In the final paragraph of this volume’s Introduction, the author writes the following: ‘The world would be a miserable place without birds, and in this book I hope to show how the relationship between us and our avian counterparts has evolved. Our modern attitudes are very much shaped by our ancestor’s beliefs and experiences’. It is an excellent precis of the book’s content.

In addition to the afore-mentioned paragraph, the Introduction also discusses the place that birds have played in human society throughout the centuries. It is followed by an Acknowledgements section, within-which those who assisted with this volume are thanked. The 30 sections which comprise the majority of the volume follow. The book contains no Chapters per se’, but rather Sections devoted to individual bird types. These are unnumbered, but include both the common (Blackbird) and the exotic (Flamingo). Although not stated, the qualification for inclusion with this volume seems to be that at some stage such birds have either been resident in the British Isles or are familiar parts of British culture (the Ostrich being a case in point). Within each Section, the reader is introduced to the subject, and given details of both its behaviour and its place in British and European legend and folklore. Subsections enclosed in boxes within each section provide additional, frequently-idiosyncratic details about the bird-type under discussion.  The Seagull on Stage (page 67) is one such example.  Where appropriate, the author includes personal reminiscences about the bird he is describing. The volume contains numerous illustrations. These are largely photographic in nature and comprise both monochrome and colour images. However, where required by the narrative, there are also reproductions of etchings, drawings, manuscripts and trademarks. While the sources of some of these photographs / images etc. are noted, many do not provide that detail. The Index and Contents pages contain no reference to the existence of illustrations within the work.  Numerous quotes also appear throughout the volume. Regrettably these lack source-citations, and as a result their authenticity must inevitably be questioned. A two-page Index completes the volume. Despite the fact that some species are range-specific while others migrate over considerable distances, the book contains no Maps.

That this volume is readable and well-researched is very evident. This reviewer does however have reservations concerning the Index. During the review process, words were randomly sought from within the Index.  Included were such terms as Publius Claudius Pulcher (page 13), Ostrich Racing (page 104) and Heyhoe (page 176).  No Index entry was found for any of these terms. In addition, although the Index noted that the term Falconry appeared on pages 34 and 71-72, that term also appeared on pages 126 and 127. Why the latter entries were omitted is unknown. As these were the results of random Index searches; what else may be missing cannot be known.

As already noted this volume is readable and well-researched. Despite the previously noted ‘limitations’, it is likely to have wide reader appeal. ‘Bird lovers’ of all persuasions and interest-levels are likely to find it a delight and it could well become a standard reference work with their libraries.  Readers who simply see a bird and want to learn about it, are also likely to find this volume of use. The unusual information it contains may also appeal to the compilers of ‘Pub-quiz’ competitions, while visual artists could find the photographs a useful resource.

BOOK REVIEW: ‘ A History of Birds’