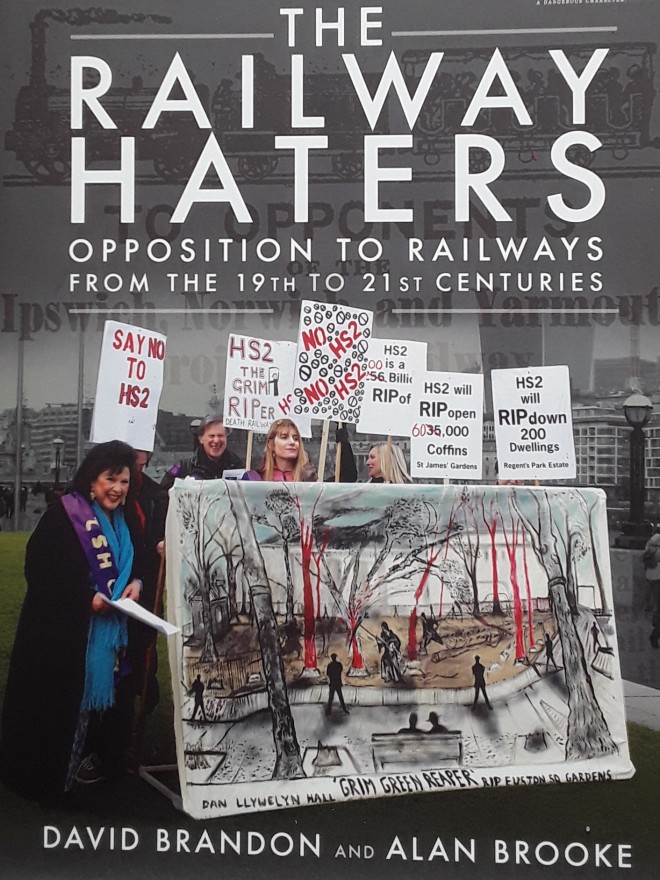 Title: The Railway Haters: Opposition To Railways From The 19th To 21st Centuries

In a society where railways are seen as an important part of the national infrastructure it is almost inconceivable that at one time there were individuals and organisations which opposed the construction and introduction of such a vital part of the national transport system; or that such individuals might actually still exist. That in fact there was (and still is) opposition to railways is the premise of this volume. The author’s specific interest is ‘…With the economic, social, political and cultural impact of Britain’s railways’, and that it is their  ‘…Perception that comparatively little work has been published specifically examining the responses of the landed aristocracy to the coming of the railways in the nineteenth [sic] century’. This volume is the result, the authors hoping that ‘…These introductory efforts will stimulate more research in this field’. The result makes for interesting reading.

The volume opens with an Introduction, placed immediately after its Contents page. This summarises what is to follow. It is in turn followed by the fourteen Chapters which form the book’s main section. Although the volume is essentially about the politics of protest, it inevitably incorporates social history into its narrative. An example of the latter occurs in Chapter One (The Impact of Industrialisation and Urbanisation on Britain) the title being self-explanatory, and indicative of the secondary theme which runs throughout the volume. The book is focused is largely (but not totally) on events during the 1830-1900 period and in support of this, narrates the many and varied forms and sources of anti-railway opposition during that time. The result is Chapters baring titles such Challenges facing the Landed Aristocracy in the Early Nineteenth Century (Chapter Four) and Other types of opposition to the Railways (Chapter 10). Conversely, and in addition to Chapter One, Chapter 13 (Examples of Support for Railways) presents an alternative view; that railways are in fact a ‘Positive’ for society. Within each Chapter, where it is necessary to provide more detail about a specific part of the larger narrative, Sub-headings are used for the purpose. Additional information is also provided through the use of Chapter-specific and numerically-sequenced End notes. The Citations for these appear in a dedicated Notes section placed after the book’s Select Bibliography.  The volume’s final Chapter (Fourteen, Hostility Continues) is followed by a Select Bibliography within-which the printed sources used in its compilation are listed. No online sources are included in the list.  The previously-mentioned Notes section follows the Bibliography, and is in turn followed by an Index; the book’s final section. The volume contains a small number of illustrations.  These are frequently unsourced, monochrome in format and are largely reproductions of contemporary cartoons and engravings. Several photographs also appear. Neither the Table of Contents nor Index sections carry reference to the illustrations’ existence. Numerous Quotes also appear. As with the images, many of these carry no supporting source-indicating citations, those appearing on pages 294-295 being but three of many similar examples. Curiously, given the volume’s subject, it contains no Maps of any sort; an unusual omission.

While this volume is both well-written and researched, for this reviewer it was let down by its Index. Random Index searching for such subjects as the assorted Earls (Burlington, Carlisle, Yarborough, Lonsdale, Powys) mentioned on page 59, Chatsworth House (page 112) and Catterick (page 368) found no entries. Subjects such as the Cheap Trains Act 1883 found an entry on page 231 but not page 168. George Hudson was treated in a similar manner, with the Index indicating the existence of entries on pages 37, 39-40, 94-95, 98 and 125, but not on page 181. Why there should be such inconsistencies is not known. When such omissions are combined with the aforementioned ‘difficulties’ in respect of Quotes, Maps etc. the result is disappointing.

Although the volume is primarily intended for a railway-focussed audience, especially those readers interested in the early history of railways within the United Kingdom, the breadth and comprehensiveness of its coverage is likely to make it of interest to Social Historians and those with an interest in the Industrial Revolution as it affected British society.

BOOK REVIEW: ‘The Railway Haters: Opposition To Railways From The 19th To 21st Centuries’