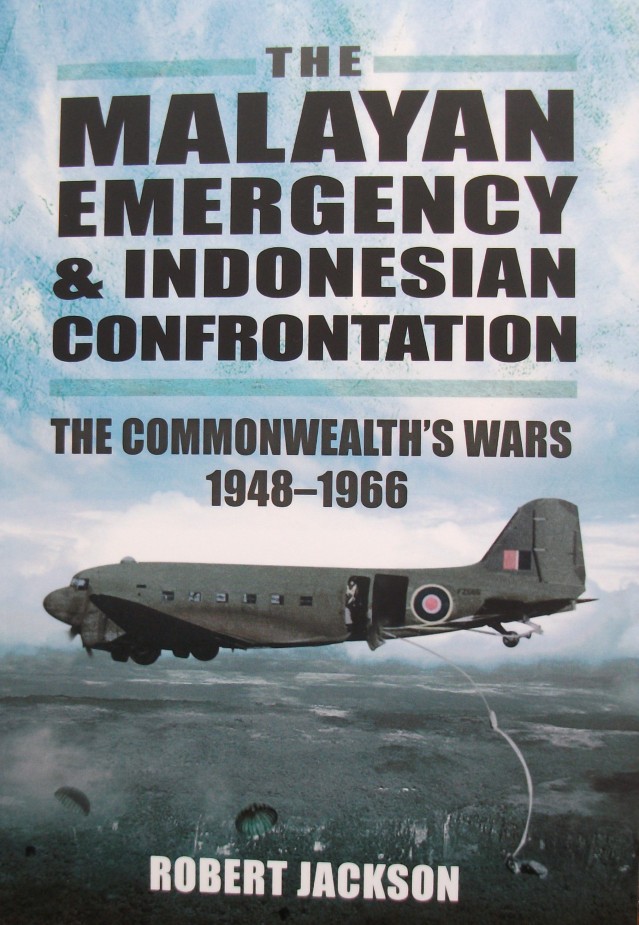 Title: The Malayan Emergency and Indonesian Confrontation: The Commonwealth’s Wars 1948-1966

Ask the average person what they know about Britain’s ‘Small Wars’ and they will invariably mention India and Africa, perhaps even the Falklands. Ask them if they know anything about the Malayan Emergency and they may say that they had heard of it (perhaps from a relative serving there) but beyond that, they know little.  Ask about ‘Confrontation’ and the response will usually be; ’Never heard of it’.  This book goes a long way to remedying that oversight.

The Preface of this volume summarises its contents succinctly: ‘Between 1948 and 1966, British Commonwealth forces fought two campaigns in South-East Asia; the first against Communist terrorists in Malaya, the second against Indonesian forces in Borneo’. As they both occurred within the same geographical area and within 18 months of each other, it has suited this author to group these two conflicts together  They were however two separate and largely-unrelated entities, with what became known as the Malayan Emergency occupying the larger part of the narrative. it is on that basis that this volume will be reviewed. Despite that minor detail, the volume is an excellent narration of the ‘Malayan’ wars. It could become a standard reference work on its subject.

When describing the Malayan Emergency, the author introduces the reader to the various causes of the conflict, the protagonists and the military actions that were taken. These are presented clearly and in a well-written and readable style. The ‘Emergency was the first time after World War II in which the British military machine made serious use of aircraft in its military operations. Due to its uniqueness, several chapters have been devoted to both describing and analysing this aspect of the operation. A chapter on Psychological warfare as it was applied to the ‘Emergency is also provided, Conversely the British Commonwealth-Indonesian military conflict now known as the Confrontation is the subject of only a single chapter.

A Preface at the beginning of the volume summarises its subject. This is followed by 15 Chapters. To provide an all-important background, Chapter One introduces the reader to ‘Malaya: The land and the people’. This is followed in turn by seven Chapters (No.’s 2-8) which outline the causes of the conflict, its development, the various military operations which occurred and  the circumstances which contributed to its final outcome. Chapters 9-12 provide details of how air power was used in the conflict, while Chapter 13 is devoted specifically to Psychological Warfare as it was applied to the ‘Emergency. Chapter 14 presents the author’s conclusions about that conflict and its place in history, while Chapter 15 is devoted entirely to the Indonesian Confrontation of 1962-1966. Two Appendices follow. The first records naval operations that occurred during both the ‘Emergency and Confrontation.  The second, the various Commonwealth military and aviation units deployed during the ‘Emergency. A Bibliography follows the Appendices, while an Index concludes the volume.  Two Maps are provided. These show the relevant ‘combat areas’ discussed within the book. The volume contains no photographs.

This reviewer could find little to fault in this volume, although some photographs showing the terrain being fought through could perhaps have provided context for the narrative. He wonders though, if the author’s description of the Avro Lincoln as a ‘Medium Bomber’ (P.69) might raise some eyebrows amongst former Lincoln aircrew who were told that their aeroplane was in fact a ‘Heavy’.

Those with an interest in either Post-World War II British military history, Royal Air Force operations in Asia, or military operations in the (British) ‘Far East’ may find this volume of value, as could former service personnel who participated in the conflicts it describes.